Pre-COVID I was driving up New Hampshire Route 302, and my eye caught this steel beast sitting on a railbed that paralleled the road. 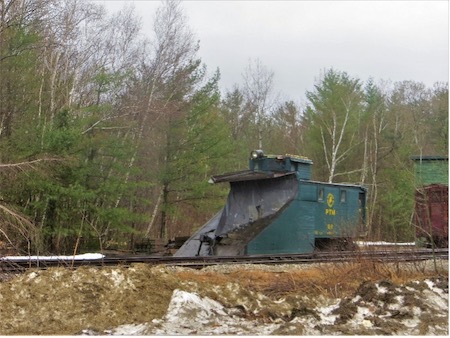 It’s a big snowplow: track-clearing equipment from the old Portland Terminal Company, which connected with the Maine Central Railroad. Based on size, there must have been one heck of a lot of snow in the olden days up in the White Mountains of New Hampshire!

Indeed, the weather was pleasant, and that’s why a fine old resort named Bretton Woods became an iconic name in the history of our modern world.

In fact, the term “Bretton Woods” explains why the U.S. economy has pretty much dominated the world for your lifetime.

Let’s dig into it…

Nestled at the foot of Mt. Washington in the White Mountains, Bretton Woods is a sturdy, substantial and handsome place. Quite the hotel, despite being in a far-off locale. Here’s a shot from near the front gate. 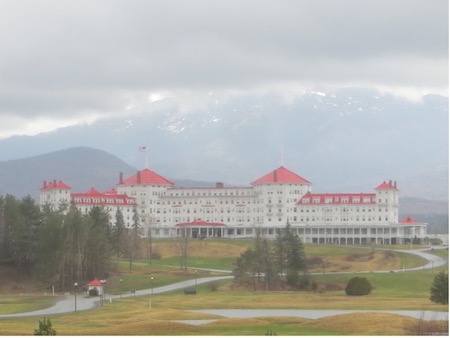 The elegant structure was built in 1902, almost entirely of wood. The business case for the hotel was to serve people who lived in sweltering New England coastal cities. They’d take a train up those old Maine Central tracks and “summer” (a verb used by rich folks) in the cool breezes of mountainous northern New Hampshire.

Over the decades, the hotel had its ups and downs. Things went well in the early 1900s. They tightened up during World War I. Business roared during the 1920s. The clientele was depressed in the 1930s.

During World War II, Bretton Woods was a training site for U.S. military personnel. And then in July 1944, Bretton Woods went down in history. Things happened there which truly changed the world.

Let’s back up to December 1941, right after the Japanese attack on Pearl Harbor. American monetary planners were working with counterparts in Britain and other friendly countries across the world. The goal was to maintain a semblance of economic stability in a world at total war.

“War is a continuation of politics, with the admixture of other means,” wrote the great scholar of the subject Karl Clausewitz in his book “On War.”

He should have mentioned that war is a continuation of economics as well. That is, war is strategy, a marriage of political goals with available resources. And resources are the product and output of a nation’s economy — or even better, the output of the economies of an alliance of nations.

Waging war — the kinetic actions of war — requires a series of well-thought operations and campaigns. There are battles between ships, airplanes and troops in the field. That’s how “war” works, as far as it goes.

But World War II was vast to an unprecedented scale. It required immense resources, and yet the correlation of opposing forces dramatically disrupted global trade. German and Japanese aircraft, ships and submarines drove most non-war-related trade from the seas. Passenger and cargo movement was iffy on the best of days.

Think about the idea of “global trade.” Most trade goods (certainly most trade goods in the 1940s and earlier) moved across oceans in cargo ships, via a multitude of channels of commerce. In fact, many shipping routes traced historical roots back over several centuries (and still do).

For example, South American goods had been moving to Europe since the days of the early Portuguese and Spaniards. Or goods moved back and forth between Europe and Asia. There were many lines of trade on many a map.

Most of these oceanic trade routes simply vanished as war broke out due to the clear dangers of sailing. During the war, thousands of ships were destroyed with crews and cargoes lost to the abyss. And many nations — exporting, importing, trading nations — saw their economic situation move from bad to terrible.

What do nations do when their basis of commerce is wrecked? One thing governments do is devalue the national currency. Open the printing presses and put cash in people’s pockets. People like that feel of cash, right?

Opening the presses is pure populism, though. The “bags of cash” approach will work for a while. But paper in the pocket isn’t the same thing as wealth within an economy or society.

All of which takes us back to 1941 and 1942. After Pearl Harbor, the U.S. was in the war, fully committed and (fortuitously) well-protected by two oceans from the actual belligerents.

Large areas of the rest of the world were still, back then, subject to European colonial power, too. Britain had colonies across the globe; however, German submarines made trade with Britain problematic. Plus, Britain lost key colonies to Japan, such as Malaya (now Malaysia) and strategic Singapore. All this, while Australia, New Zealand and even India were under threat from Japan.

France and the Netherlands had overseas colonies as well, but both countries were occupied by Germany. Indeed, in 1942 French Indochina (Vietnam) and the Dutch Indies (Indonesia) were seized and controlled by Japanese forces.

Among the key allied powers — the U.S., Britain and of course the Soviet Union — leaders understood that the war had to be won with hard fighting on land, at sea and in the air.

But the wartime leaders also understood that fighting the war — and winning, and then rebuilding post-war — would require a stable economic base.

To all who understood the issues, there was clearly a need for a “global” approach to monetary policy. This included paying for the war as events progressed and setting up some semblance of global trade as parts of the world became safe, or were eventually liberated and/or conquered.

By mid-1944, most back-office negotiations were over. There was a framework for setting up a global-scale monetary system with which to win the war and begin the big rebuild.

At this point, let’s bring up British economist John Maynard Keynes, who was a key adviser to the government of the United Kingdom.

Keynes was famous and very plugged in. Indeed, he was well-acquainted with U.S. President Franklin Roosevelt; they had met in 1919 in France during negotiations over the Treaty of Versailles. And Keynes was a presence in Washington D.C. during World War II.

Keynes made it known to his U.S. counterparts that he was suffering from a lung condition. He did not want to attend a mid-summer monetary conference in hot, muggy, pre-air-conditioning Washington. And could this global monetary event please find a venue elsewhere?

President Roosevelt was an old New England man, Groton, Harvard and all. He knew Bretton Woods and suggested the place as the site for the big conference about money. There were no objections, of course.

In July 1944 about 730 delegates from 44 countries made their way to Bretton Woods. They wandered the halls, rubbing elbows and holding sidebars… 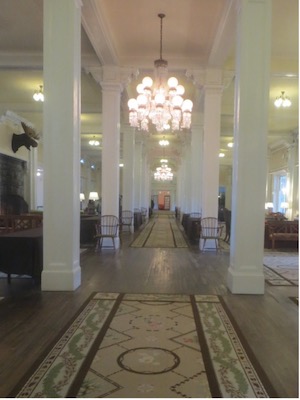 Oh, if walls could speak! The grand halls of Bretton Woods. BWK photo.

The delegates hammered out the final details of what became known as the Bretton Woods Agreement, a blueprint for a new type of global-scale financial system. In essence, the agreement placed the world on a modified gold standard. 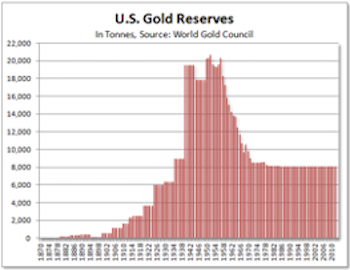 U.S. gold holdings far exceeded those of any other nation. Quite simply, in terms of hard money the U.S. dominated the world economy. It was truly a case of the old saying about golden Rules. The U.S. held the gold and made the rules.

At Bretton Woods, the U.S. agreed to back the dollar at a fixed measure of gold, pegged to $35 per ounce. Other global currencies were then pegged to the US dollar.

The Bretton Woods players signed papers and sealed the deal, right here in this room. It remains open and on display at the hotel. 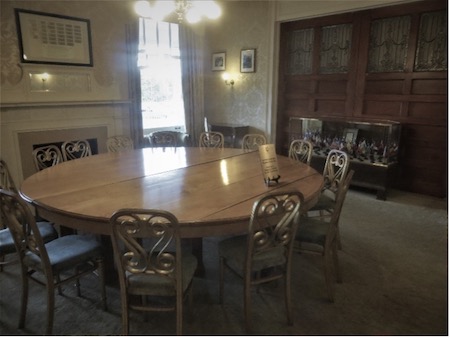 The table where the deal was sealed, at Bretton Woods. BWK photo.

The Bretton Woods Agreement created monetary stability across the globe. Every participating nation had an idea of how to manage their currency, relative to the U.S. dollar with its “fix” to gold.

The key element of Bretton Woods was the peg for exchange rates. If any nation over-printed currency — over-expanded its money supply in excess to the general wealth creation of its economy — the peg to gold would reflect that in a decline in value of that nation’s currency.

Another way to view it was that Bretton Woods offered the world the opportunity for gold-backed monetary discipline.

“Bretton Woods” became shorthand for a system by which allied nations could control their respective currencies. Nations could work together for the global good. And pegged exchange rates were a restraint on raw economic nationalism.

Another outcome of Bretton Woods was to establish a new institution called the International Bank for Reconstruction and Development (IBRD). It was a global-scale lender that controlled a vast supply of dollars — the new global “reserve currency.” Its mission was to lend funds and help rebuild countries that had been ravished by the war. Today, we know the IBRD as the World Bank.

Even the Soviets participated at Bretton Woods. Hanging on the wall of the room where the papers were signed is a photo of the Soviet delegation with American colleagues. 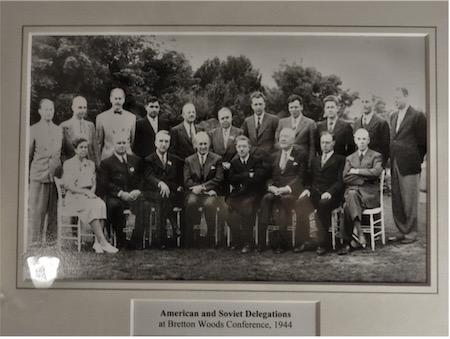 The Soviets didn’t sign the Bretton Woods Agreement. They were wary of tying their economic fortunes to any currency of the capitalist West, even if backed by gold. So the Soviet delegation was in New Hampshire to observe things and guard their national interests.

Still, the Soviets were well-educated in Western economic concepts and quite observant. Indeed, one person whom the Soviets closely observed was senior U.S. delegate Harry Dexter White, a Soviet spy. 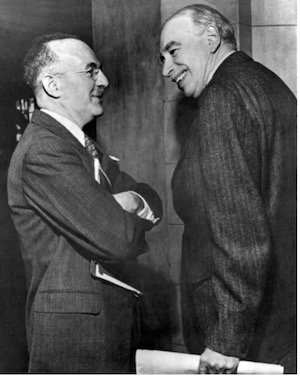 According to my colleague Jim Rickards, “White was a Stalinist agent inside the U.S. Treasury.” His agenda was “to hasten the demise of the British Empire by … highlighting the U.K.’s gold shortage.”

As we know from history, the British Empire collapsed in the 20 years after World War II. A major factor in this was that Britain simply could not afford to keep its empire. And meanwhile, Bretton Woods placed the U.S. in the driver’s seat of the global economy.

Bretton Woods lasted until Aug.15, 1971, when President Nixon “closed the gold window,” as the saying goes. That 50th anniversary is next month, in fact.

In essence, Nixon dropped the dollar-peg for gold due to massive U.S. dollar inflation coming out of the Vietnam War and the domestic so-called “Great Society/War on Poverty.” The U.S. simply could not afford the dreams and ambitions of its politicians.

Since the early 1970s, the world has been on a “petrodollar” standard, in which the dollar strengthens or weakens based on actions by the Federal Reserve, often as not in conjunction with the abundance or scarcity of global petroleum supply. We’ll discuss that another time.

For now, just think back 77 years to that summer of 1944 and events at Bretton Woods. It’s more than fair to say that it was when and where the modern dollar was born.

And Bretton Woods (along with military power, particularly nuclear weapons) is why the U.S. economy came to dominate the globe in the postwar era.

And on that note, I rest my case…

Thank you for reading.