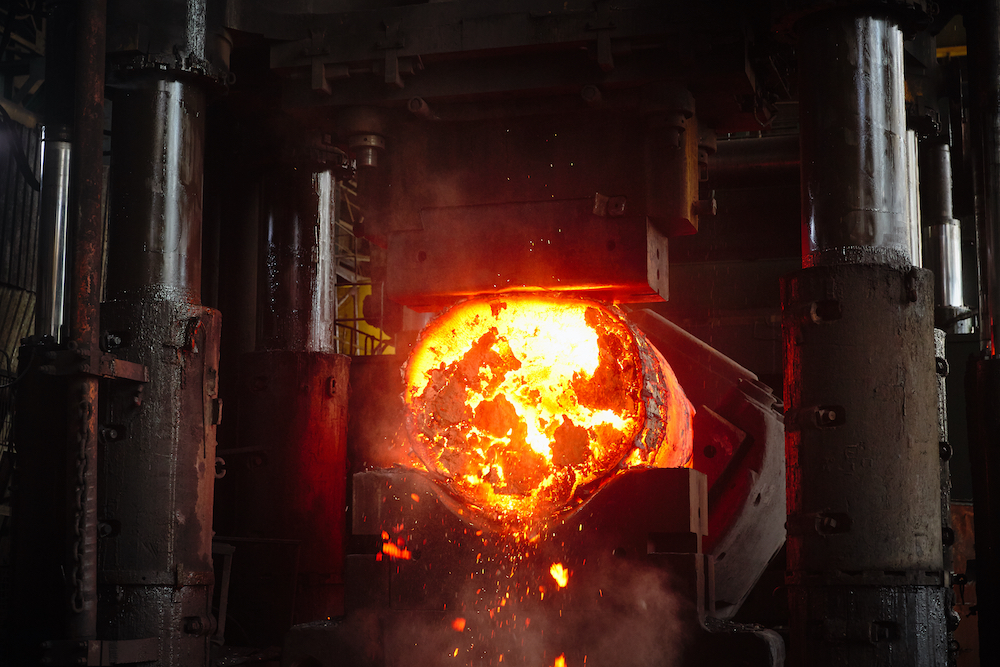 I was at a local gym not long ago using the fancy exercise equipment.

A young guy was working out just a few feet away, pumping iron with free weights. I gave him one of those gym-nods, along the lines of saying hello without engaging further.

A few minutes later, he came over and asked if I’d spot him while he did some bench presses.

I said sure, and for the next few minutes I kept an eye on this fellow as he lifted iron. And the guy was strong, too. He was pushing well over 200 pounds in a series of increasing reps.

When he was finished, the guy thanked me. And we started talking about working out and other related gym-rat things.

Along the way I asked him how high he wanted to go in terms of benching weight. He said his goal was 250 pounds, and he’d keep it there. He doesn’t want to go all Sylvester Stallone, so to speak.

Then he asked me, “What’s the heaviest lift you’ve ever seen?”

The guy looked at me like I was crazy. And then I added, “It’s a bit of a story.”

No, of course I’ve never seen a human being lift 50,000 tons. That would be Superman or the Incredible Hulk. And they only exist in comic books.

But some years back I visited a facility in Cleveland owned by aluminum maker Alcoa. And I met “Big 50,” aka the Iron Giant. 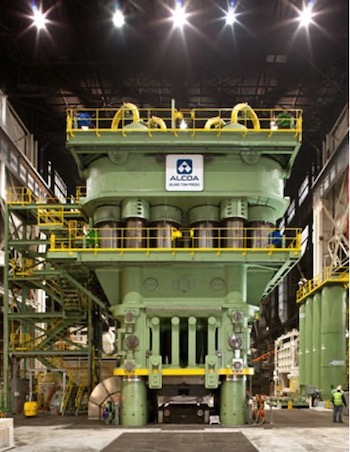 They call this machine the Big 50. It’s a 12-story tall forging press that can exert 50,000 tons of force. It squeezes metal into different shapes.

Look at it this way: 50,000 tons is enough to bench press a World War II era Navy battleship. Hence my comment to the weightlifter at the gym.

How does this beast work? Well, take an ingot of metal — say, steel, aluminum or titanium. Then heat it to improve malleability. Place this hot metal between two dies.

Then press the top die down onto the bottom die. This forces the malleable metal to flow and fill the space within the dies.

Titanium bulkheads for F-15 aircraft, before and after.
(Photos Courtesy of U.S. Department of the Interior.)

You see raw titanium shapes on the left. Heat them up, squeeze down with the forging press and voila… You have those nice, clean-looking shapes on the right.

Add some final milling and machining to get small defects off, plus final cleanup. And the next thing you know you’re building a high-performance jet aircraft.

The press replaces much other work, in terms of forming a structure. Compare it to, say, riveting a structure together from multiple parts. Or taking a massive block of metal and machining it down, like a sculptor chipping a statue out of a block of stone.

A forging press offers dramatic reductions of labor and far less material waste. Just heat and press down to create large, complex shapes out of one single slab.

Meanwhile, the process makes the end product stronger. Heavy forging tends to align the atoms, which dramatically improves strength. Plus, there are fewer stress points like with drilling holes and riveting; less chance of the metal crystallizing and fracturing or breaking.

This kind of inner strength is important when you’re doing things like flying, whether it’s a fighter plane or just a run of the factory airliner.

And it opens the Whiskey bar to another excursion back into the halls of history.

The technological DNA of Alcoa’s Big 50 goes back a century to the end of the First World War and the Treaty of Versailles.

Per that treaty, Germany lost much of its steel-making capacity, including armor plate. Plus, the German government was forbidden to build large naval vessels.

As the 1920s and 30s unfolded, German industry adapted to the restrictions. Research labs and manufacturing firms focused on developing metallurgical technology that used metals other than steel, let alone armor. In other words, sanctions drove innovation.

And while the German navy was forbidden to build large ships, the aviation industry in both Germany and across the world was in a heyday of early growth. Out of necessity in those years, German industry developed ways to fabricate strong, lightweight structures for aircraft.

One particular focus was in using magnesium and aluminum. German firms developed novel techniques to shape these metals into complex structures using high pressure. The process was called press-forging.

In the late 1930s, the German government repudiated the Treaty of Versailles and Germany’s military-industrial complex broke out into the open.

German-developed press-forge tech went into high gear, with thousands of new applications in all manner of military equipment, from aircraft to ships, submarines, land vehicles and even infantry weapons.

Indeed, one secret to German military success in the early years of World War II was a distinct industrial and qualitative superiority in the weapons and systems that were provided to the country’s fighting forces.

Intelligence analysis indicated that the Germans produced these aircraft components with the aid of huge forging and extrusion presses. The bottom line was that German manufacturing capabilities were, in many respects, superior to those of the U.S. aviation industrial complex.

In this respect alone, it's fair to say that German press-forge technology came as a rude shock to the U.S. and Allies. And it was not just airplanes. German press-forged components were critical to numerous other arenas of technology from submarines to jet engines to rockets.

History buffs may also know that Germany maintained significant aircraft production nearly to the very end of World War II. Indeed, it’s fair to say that Germany ran out of gas and skilled pilots before it ran out of airplanes.

This robust production capability wasn't simply a reflection of the managerial skill of German planners, nor in particular of Armaments Minister Albert Speer. No, Germany's industrial achievement to the bitter end was rooted in the fact that that many aviation components were manufactured via press-forging. It saved countless man-hours on factory floors, as well as energy and scarce materials.

Post-war, German press-forging technology became a strategic issue. Due to the vagaries of geography, the most powerful German press-forge machines were in areas seized by the Red Army. And Soviet “trophy brigades” dismantled entire German factories and complexes (and certainly the German press-forges) and sent them back to Russia.

The Soviets then put these German presses to good use, turning out components for the early series of MiG jet fighters. A few years later, the remarkable performance of those MiGs was demonstrated in the skies over Korea, as we’ll discuss in a moment.

On the U.S. side, after World War II a long list of design bureaus and intelligence agencies also began a program to exploit the German heavy-press technology. U.S. planners and logisticians certainly understood the need for heavy presses in aircraft and other industrial applications. But the abrupt, postwar military drawdown kept funding levels thin.

Meanwhile, in the postwar environment America’s politicians and policymakers felt no sense of urgency to drive ahead with press-forges. Part of the lack of emphasis was the relatively arcane nature of the technology. Press-forging was new (to Americans), mostly unknown and literally foreign. It was the “not invented here” syndrome.

Another angle was a sense of U.S. triumphalism. That is, U.S. industry had pulled through during the war and many players in and out of government believed that there was no further need to seek improvements. The result was that U.S. industry continued to build complex aircraft structures piece by piece, rivet by rivet.

Then in June 1950 the Korean War broke out. In the skies above Korea, U.S. aircraft were soon outnumbered, and in many respects outclassed, by Soviet-built MiG fighters flown by veteran (and quite competent) Russian pilots.

In October 1951 one bombing mission by U.S. Air Force B-29s took 66% losses in a matter of minutes to Soviet-flown fighter jets.[1] And back home, the brass took notice.

“Black Tuesday” in Korea was the worst day for American airpower since World War II. It drove home the point that U.S. airplanes were inferior in many respects to Soviet equipment. And the implications were far-reaching.

Within months, a high-level military-industry review panel determined that the U.S. lacked major industrial capability to manufacture heavy extrusions and high-strength forgings. In essence, the Korean aerial losses demonstrated how far behind U.S. industry was compared to the Soviets. (Nobody called it a “press-forge gap,” as far as I can determine.)

The Air Force initiated a program to build a set of large, heavy-press forges. This became the USAF Heavy Press Program. And by 1957, U.S. industry had built 10 major forges, funded by taxpayer dollars.

The U.S. wound up with four heavy presses (including Alcoa’s Big 50) and six extruders, which are gigantic devices that squeeze-out long, complex metal structures such as wing spars.

Which brings us back to my visit, a few years back, to Cleveland and Alcoa. The massive Big 50 machine was designed by the legendary —- and alas, long gone — Mesta Machine Co. of West Homestead, Pa., just south of Pittsburgh.

Big 50 weighs over 8,000 tons, about as much as a Navy destroyer. The foundation alone is dug 80 feet into the ground. And the bolts that hold down Big 50 are 78 feet long, and 40 inches in diameter.

Big 50 is made of 14 major structural components, cast from steel, all weighing between 220 and 312 tons. According to Alcoa, the largest steel component required nearly two weeks to cool down after it was poured into the mold. 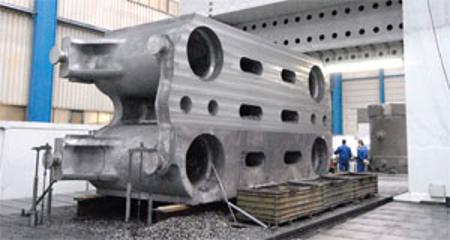 Nothing lasts forever though. And in 2008 Alcoa detected cracks in Big 50, which led to a three-year, $100 million rebuilding effort.

Alcoa took the Big 50 apart, down to the last screws and wire bundles. Every significant part was refurbished or replaced, and in many instances upgraded with new technology. For example, Alcoa replaced old, 1950s-era mechanical actuators with modern, water-hydraulic technology.

Big 50 now possesses dramatically improved tolerances. According to Alcoa, operators can control the 50,000-ton force of the Big 50 to within thousandths of an inch.

What do countries do with such massive presses? Well, consider what Alcoa accomplished over the past 65 years with the Big 50. Think in terms of aerospace, nuclear components, energy systems, ship and submarine building and more.

I spoke with someone in the steel business, who summed it up this way: “Sometimes, you don’t know what you can do with that much power until you start squeezing metal. But once you figure it out, you can have a generational advantage over the competition.”

On that point, we'll eventually find out. But there’s no escaping the basic truth that in industry, as with life, if you want to stay strong and healthy you have to keep on pumping iron.

How Much Are They Really Telling Us About UFOs?