The title of this article is a riff on what Leon Trotsky once said about war.

Some things are out of your control. When war breaks out, it breaks out. You may not have assassinated the Archduke in Sarajevo, but you’re still involved after some other guy did the deed.

When things break down, you just have to roll; you make your way as best you can.

Today we’ll apply that same thinking to an element of the periodic table, namely copper.

We’re in the early innings of major changes in the world’s use of copper, and by extension, we’ll see major moves in prices. There’s money to be made if you play it right. And of course, I’ll give you some ideas below.

There’s much more to say, so let’s dig in…

No doubt you’re aware of price increases in just about everything lately.

Go to the gas station or the grocery store. Go buy some lumber. Or consider the empty shelves and order backlogs for everything from new furniture to swimming pool chemicals.

You know what happened. The global economy twisted itself into a knot last year, with Covid and related shutdowns.

Across the globe, vast and intricate wiring diagrams of supply chains tangled up into tight knots, as we saw with the problems created by a single ship running aground in the Suez Canal not long ago.

Now, you may not buy much raw copper — unless you are perhaps installing new, high end gutters and downspouts. But copper prices have soared recently.

Here’s the copper chart ($COPPER) versus the dollar ($USD) over the past five years. 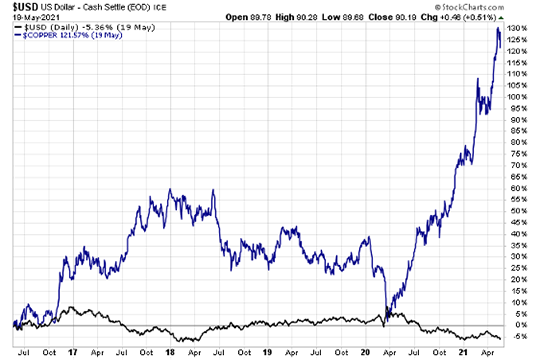 As you can see from the chart, the dollar has fluctuated in a tight range. But for all the monetary issues with the dollar (and there are many), this doesn’t control what’s happening with copper.

But look at copper since last spring. Prices have climbed firm and fast. What’s happening here?

It’s a copper-led industrial recovery that touches many things across the world.

First, one quick point. Note that copper isn’t Bitcoin or some other cyber-instrument. Copper is a real thing, not an encrypted code. People mine copper, process it and refine it into metal that goes into just about everything — including the machines that crunch crypto keys.

If you’re reading this article, think copper. And thank copper. Your computer, smart phone and other electronics wouldn’t work without it. Your electricity arrives via copper wires. And there’s much more copper involved in the upstream process, from transformers on utility poles back all the way to the power plant.

In other articles, we’ve discussed how the Biden administration’s new emphasis on so-called “infrastructure” will require more copper. Well, yes. That’s absolutely true if the U.S. begins to rebuild its aging and accident-prone electric grid.

It took 150 years to build out the current U.S. grid. If the U.S. really goes “all electric” the country will have to triple the size and scope of this system within the next 25 years.

We’ve looked at the growing focus on EVs for transport, from the car in your driveway to delivery trucks, buses and more. Part of it is the Biden administration’s push against hydrocarbon fuels. Much of it is an industrial trend that was happening in any event.

One way or another, we’ll see more and more copper demand.

This looming copper rush is not just an American thing, either. Indeed, over half of the world’s annual copper supply is used in China, and there’s no sign of slowdown there. Belt-and-Road, military buildup, factory to the world, you name it. China does copper, big time.

Meanwhile, the rest of the world is also following similar demand trends for copper. According to Germany’s Commerzbank AG, “The decarbonization trends in many countries — which include switching to electric vehicles and expanding wind and solar power — are likely to generate additional demand for metals (meaning copper and others, ed.).”[1]

Other major trading houses and merchant banks also expect copper to extend gains, from Bank of America to Citigroup. And according to Goldman Sachs, “Copper is the new oil.”[2]

All well and good, but there are problems.

At the outset, one critical issue is that most of the world’s largest copper mines are old. And I mean old!

According to the consulting firm Wood Mackenzie, the average date of discovery of the world’s top 20 copper mines was 1928. No typo. 1-9-2-8. 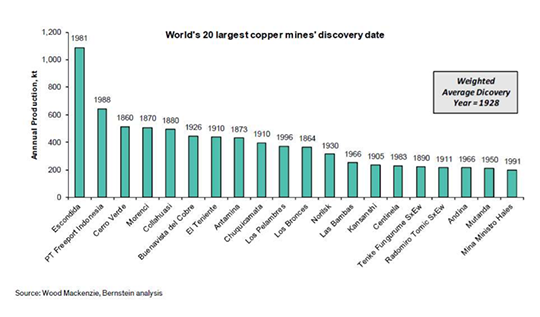 You don’t have to be a geology scholar to understand the import of this point. The average age of the world’s copper discoveries is 93 years old. In other words, they happened a long, long time ago.

As a real live geologist, I must admit that even I was impressed (if that’s the word) at the age of some of the names on this discovery list above.

If you follow the copper space, then you recognize a number of true icons. Mines like Escondida in Chile, Freeport’s Grasberg in Indonesia, Morenci in Arizona. And even a personal favorite of mine, Norilsk in Russia. Superb operations, really.

All of these mining projects have their unique geologic merits. They’ve served mankind quite well over the decades. But even the best mines play out over time.

And as mines play out, industry must explore and find new deposits. So, is that happening? Well, not so much.

Here’s a chart from S&P Global Market Intelligence, tracking discoveries over the past 30 years. You can see the trends. 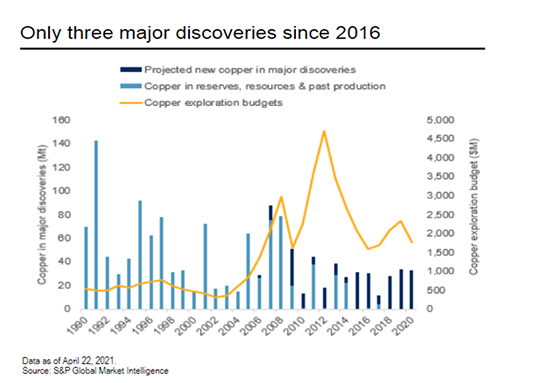 Per this chart, you can see how, in the past decade, copper exploration budgets spiked up and down. But the general trend in new discoveries is definitely down.

Meanwhile the average ore grade of copper mines across the world has been steadily falling, per other analysis by Wood Mackenzie. 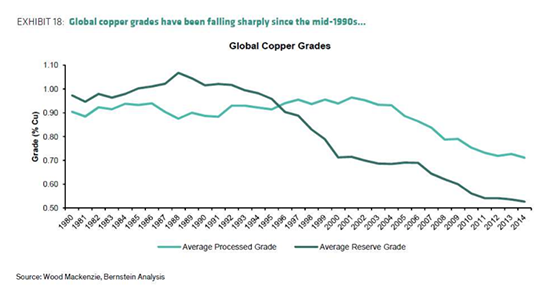 Look at those two lines in the chart. The average processed grade is steadily falling, meaning that ore that runs through the mill holds less and less copper. This means more tonnage to process, using more energy, water, chemicals and generating more waste rock. It’s more costly in every respect.

And look at that other line for average reserve grade. It’s even lower than the processed grade line. That is, what’s left in the ground for future mining is even lower grade than the low grades we see now.

Let me say that another way. Whatever we’re mining now, we’ll be mining lower grades in the future, meaning higher costs and less final product for each input of energy, labor and materials.

So where is this all leading? Glad you asked…

Here are several points to keep in mind:

Closer to home, is all of this investable? Of course.

And as I’ve noted many times before, Whiskey is not a portfolio newsletter. We’re not here to give you buy-sell advice and/or personal financial advice. But I do follow the mining space. Indeed, I watch it like a hawk. And along those lines…

Consider an industrial giant like Freeport-McMoran (FCX) which is a major player in the copper space. It’s a great company, but the share price has run up from $6.20 last year to well over $40 just now. Likely, there’s upside left as copper prices rise, but the big, multi-bag gains are behind us.

Or look at BHP (BHP), another industrial giant. Its shares are up quite well in the past year, although not the stratospheric runup we saw with Freeport. But BHP pays a nice dividend over 4%, which isn’t shabby these days.

In past articles I’ve mentioned a much smaller company named Riverside Resources (RVSDF), which trades over the counter (OTC) in the U.S. It’s under contract with the above-noted BHP to go out and find large deposits of copper and related metals in Mexico. In this respect, Riverside gives you exposure to BHP with more of an upside.

Another intriguing exploration play is Western Copper and Gold (WRN), an advanced explorer and early-stage developer in the Yukon. Western controls a massive copper-gold play up there; and yes, I’ve been to the project site numerous times. It just partnered up with mining giant Rio Tinto (RIO), which made what’s called a “strategic investment” in the company, a very positive sign. (And Rio itself pays a dividend north of 5%.)

I could offer a long list of other promising copper exploration plays in just the U.S. and Canada, let alone Mexico or South America. There are many fine names in the early days of exploration and/or development.

Group Ten works in Montana, adjacent to the massive Sibanye-Stillwater (SBSW) platinum group metals (PGM) complex. The company is an early-stage explorer. Its mineralogy is a combination of copper-nickel, PGM and a variety of other valuable metals. That is, it’s more than just a red metal play.

Still, for speculative investors out there, Group Ten is one of those companies with upside on top of upside. When I visited the site a year and a half ago (pre-Covid), the first thing I saw coming out of the drill core was fresh, high-grade nickel-PGM sulfide mineralization.

Group Ten offers domestic, exploration-level exposure to copper, as well as nickel, cobalt, PGM, gold and silver. All sitting immediately adjacent to a major mining operation in the Sibanye group. You don’t get much better than that.

That’s all for now. You can invest or not. But definitely wrap your head around the idea that copper is in play, and there’s not enough of it to go around.

Today, Byron King explains why you be interested in the gas pipeline Nordstream 2.